Consolidated Sales increased from Ps.129,443 million in 2019 to Ps.146,287 million in 2020, up 13.0% YoY (Guidance: 7% - 8%), mainly driven by higher demand in Mexico and the United States fueled by the context caused by COVID-19 backdrop, which was capitalized on through the timely execution of highly effective commercial strategies. 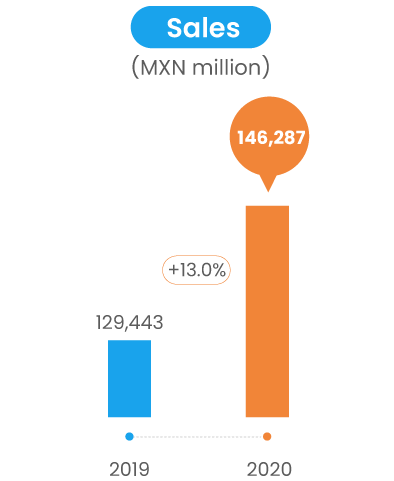 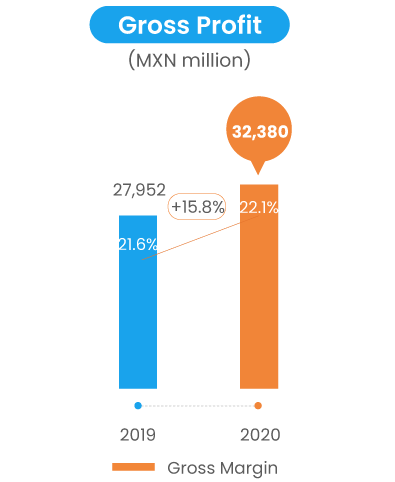 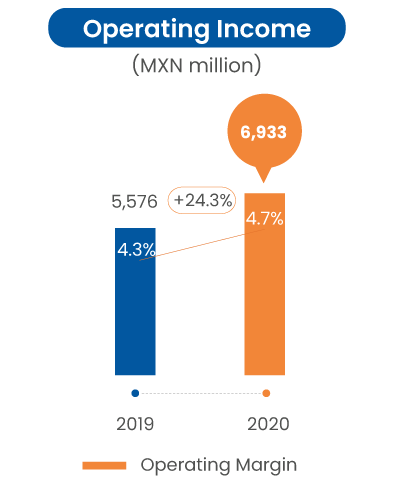 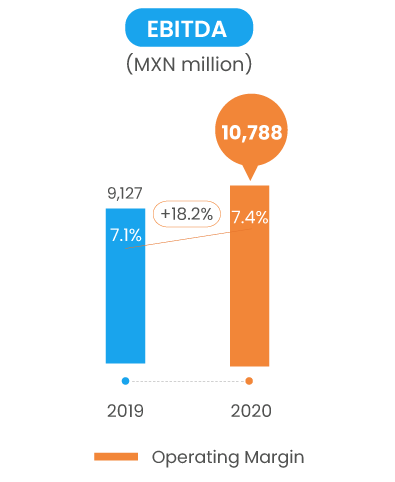 In 2020, Consolidated Net Income posted an outstanding growth of 74.0% compared to 2019, supported by the positive results achieved in all P&L lines, as well as by the lower debt, leading to a virtually unchanged financing cost compared to 2019. Consequently, net margin stood at 1.8% (+0.6 pp. YoY).

Guidance 2020 (Issued prior to the pandemic)

As part of our commitment to consolidate our presence in the region, and despite the challenging backdrop (marked by restrictions on certain activities, including construction and/or renovations), we expanded our total sales floor in Mexico by approximately 27,000 m2 (+1.8% YoY), with the net incorporation of 15 stores.

Qualifying as an essential activity for the health contingency and notwithstanding major operational challenges (mostly related to multiple operating restrictions imposed in the different jurisdictions where we operate), the Retail segment in Mexico stood out for its resilience, posting increases of 7.1 % and 8.6%, in Sales and EBITDA, respectively, totaling Ps.82,536 million and Ps.6,068 million.

Also noteworthy was the 5.5% growth in Retail Mexico same-store sales, which was driven by shifting customer consumption patterns brough about by the health contingency. This figure is positively compared to the sector performance, as reported by the Mexican retailers’ association (+5.5% vs. +5.4%). 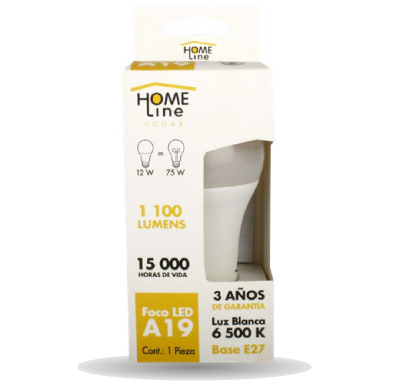 RETAIL IN THE US 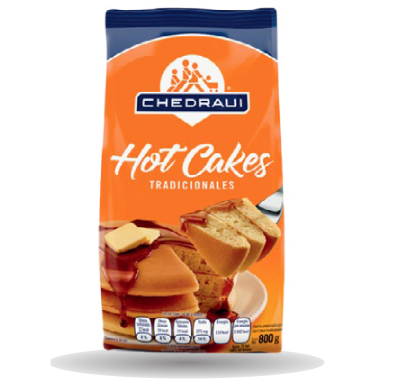 In 2018, we met the operational challenge posed by the acquisition of Fiesta Mart, L.L.C., a company that operated under a higher expense/sales structure than that of Mexico. Consequently, in 2019, we focused on the consolidation of the Fiesta stores, providing the required momentum to obtain satisfactory results in 2020, combined with the operation of El Super, which benefited from a stronger demand.

In this regard, the Retail segment in the United States posted a 22.6% increase in sales compared to 2019, mainly attributable to the double-digit revenue growth in Fiesta stores and, to a lesser extent, to a favorable calendar effect, as 2020 had an additional week compared to 2019. Similarly, same-store sales increased 7.7% YoY in U.S. dollars and on a comparable 52-week basis.

Meanwhile, EBITDA expanded 49.6% YoY to Ps.4,207 million, well ahead of sales growth, reflecting the operational improvements that Chedraui has been able to achieve in this country. EBITDA margin increased 1.2 p.p. to end 2020 at 6.7%.


In 2020, the Real Estate Division’s revenues contracted 18.7% compared to 2019, derived from the effects of temporary adjustments in rent payments, which we expect to be normalized throughout 2021. On the other hand, and notwithstanding the restrictions on non-essential activities, we managed to incorporate 10,317 m2 (+ 2.8% YoY) of leasable area.

EBITDA from this division decreased 29.3% YoY, mostly explained by costs related to the closure of some properties in response to the COVID-19 pandemic, during which we overcame other challenges to permanently offer an experience that complies with health and safety standards, for the benefit of our stakeholders.

Consequently, thanks to lower net debt and EBITDA growth, the net bank debt to EBITDA ratio for the last twelve months was 0.36 times, a significant improvement over the 1.04 times recorded at year-end 2019.

On the other hand, it is relevant to note that, when considering only our Mexico business, the net bank debt is negative for Ps.769 million.

Regarding capital investments, the accumulated CAPEX from January to December 2020 reached Ps.2,527 million. 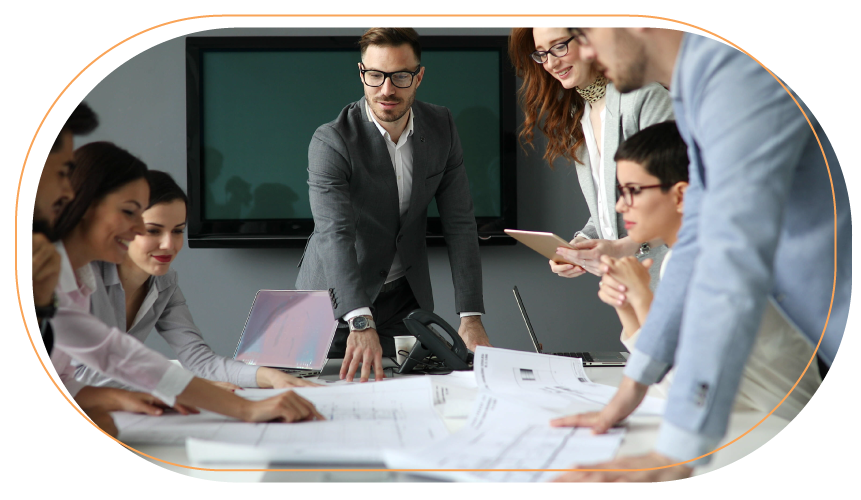